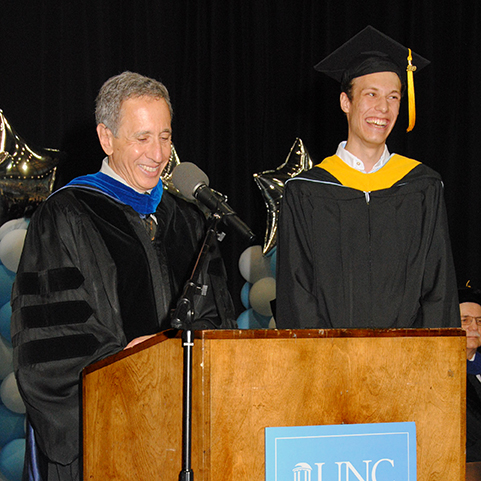 The UNC Department of Computer Science celebrated its summer 2018, winter 2018, and spring 2019 graduates with an annual ceremony in Carmichael Arena. With 335 graduates, the 2019 event was the largest to date.

Several graduating students and faculty members were also recognized with individual awards at the event. The undergraduate Class of 2019 honored professor Donald Porter with the Undergraduate Faculty Award for Excellence in Undergraduate Teaching. Professors Montek Singh and James Anderson were recognized by the graduate Computer Science Student Association with the CSSA Excellence in Teaching Award.

Graduating master’s student Joshua Bakita received the John M. Glotzer Teaching Assistant Award. Graduating senior Nicholas Rewkowski was recognized with the Learning Assistant Award, which was renamed in honor of retiring Director of Undergraduate Studies Diane Pozefsky. Another graduating senior, Helen Qin, was awarded the Stephen F. Weiss Award for Outstanding Achievement in Computer Science. All three students will have their names added to plaques hanging in the lower lobby of Sitterson Hall.

Morehead-Cain Scholar Gabriela Stein was selected by a vote of the undergraduate Class of 2019 to deliver a commencement speech. Stein stressed the need for her fellow students and the Department of Computer Science to continue to make inclusiveness a priority in the field. In February, The Chronicle of Higher Education ranked UNC among the top computer science departments in the nation in terms of the percentage of bachelor’s degrees awarded to women and the percentage change since 2009-2010.

Prior to the department-wide commencement in Carmichael Arena, all graduating students were invited to a reception in Sitterson Hall and Brooks Building, where they were served cake and ice cream by computer science faculty and alumni.

Photos of each graduating student were taken at Carmichael Arena by Photo Specialties. If you would like to purchase photos from the event, please email info@photospecialties.com or call 919-967-9576.