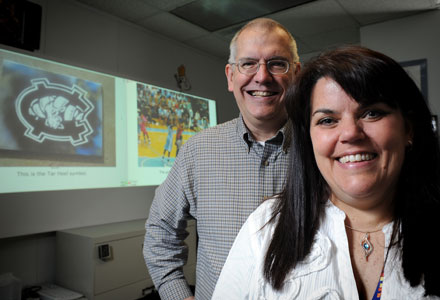 Chapel Hill, NC—Tar Heel Reader, an online program that helps students with disabilities learn to read independently, reached 10 million books read on January 7 at 7:35 p.m. The site, which was created by Karen Erickson of the Center for Literacy and Disability Studies and Gary Bishop of the Department of Computer Science at the University of North Carolina at Chapel Hill, reached the 10 million milestone less than a decade after its launch.

Tar Heel Reader is an online collection of free, easy-to-read and accessible books on a wide range of topics. The site was built to fight illiteracy among underserved populations, including those with disabilities that make it difficult to learn to read using traditional books and learning methods. Each book on Tar Heel Reader can be speech enabled and accessed using multiple types of interfaces, including touch screens, the IntelliKeys keyboard and 1 to 3 assistive switches that function like standard buttons.

“A child learning to read in a kindergarten class has access to entire libraries of books that are written for beginning readers and have subject matter interesting to a child,” said Erickson, director of the Center for Literacy and Disability Studies in the Department of Allied Health Sciences. “An older student learning to read, however, may have trouble finding a book for beginning readers about an interesting subject, and a student with a physical disability may not have the motor function to turn pages while reading.”

In 2008, Bishop, professor and associate chair for academic affairs in the Department of Computer Science in UNC’s College of Arts and Sciences, worked with Erickson to build Tar Heel Reader as a way for users to create beginner-level books aimed at older children and adolescents with disabilities.

“Wow,” one testimonial begins, “my 9-year-old has already opened his Tar Heel Reader library via a touch screen and, perhaps for the first time ever, been able to choose independently among many choices of real, interesting books he wants to read and can read.”

The Tar Heel Reader site grew organically by word of mouth and through educational conferences. Erickson recalled, “Within months of launching Tar Heel Reader, I began to see it featured at conferences as a powerful teaching tool, and the people talking about it had no connection to UNC.

“Now, I go to these conferences and see vendor booths with signs that advertise, ‘This product works with Tar Heel Reader,’” Erickson said. “How great is that?” 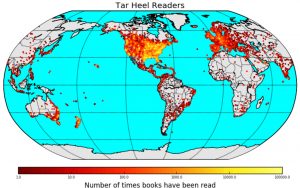 Although Tar Heel Reader was originally built for older children and adolescents with disabilities in the United States, the site’s ease of use has made it a popular choice for a variety of language teachers and students across the world. The library now contains more than 50,000 books in 27 languages and has been accessed by users in more than 200 countries and territories.

Tar Heel Reader has been visited more than three million times by more than one million unique users. The site sees an average of 700 unique visitors each day. It took Tar Heel Reader users about one thousand days to reach 2 million books read after the site launched in 2008, and it has only taken another 2,500 days to reach 10 million.

“I’m a programmer, so I’m an optimist,” Bishop said, “but I’m amazed by how far-reaching Tar Heel Reader has become. If you search ‘Tar Heel Reader’ on YouTube, you can find videos explaining in German how to set up Tar Heel Reader with a switch. There are even demonstrations that use puppets and stop motion video to explain the process.”
The UNC Department of Computer Science website has a real-time counter on the front page that updates as readers across the world finish books.

The 10 millionth book read, WW II: Women Working, is about women who entered the workforce during World War II, and features historical photos from the Library of Congress. The book was written in June 2009, by user PennyR, who was one of the site’s first 10 authors.

Visit cs-old.sites.unc.edu to view the countdown, learn more about Tar Heel Reader, and add to the collection with a book of your own.