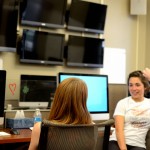 The UNC Department of Computer Science and the UNC School of Journalism and Mass Communication will host more than 300 college- and high school-aged women from 15 states for a women-focused hackathon on March 21-22.

Pearl Hacks — an innovative technical competition known as a hackathon — was founded by senior Maegan Clawges, a journalism and computer science double major, to help address the gender gap in the computer science field.

“I chose to study computer science because I wanted to learn a skill that would be relevant no matter what type of work I ended up doing,” Clawges said. “And I stayed in the field because of the amazing community that I developed through hackathons, conferences and internships that I was fortunate to have. It’s essential that all women interested in tech experience that same kind of community support.”

During the 36-hour hackathon, attendees will participate in workshops — on topics including building websites, basic software development, working with big data and an introduction to computer hardware — geared toward all levels of coding experience. Participants will then break into teams and develop projects using what they learned earlier during the workshops.

Industry professionals from companies such as Google, Cisco, and Capital One will be on-hand to educate and mentor the participants.

Dona Sarkar — a principal program manager lead at Microsoft and novelist — will deliver the Pearl Hacks keynote address March 21 at 9:30 a.m. Sarkar will share career advice based on her own professional and personal experiences.

The first Pearl Hacks in 2014 convened more than 200 women from North Carolina, Virginia and Maryland. Seventy-five percent of those participants were attending a hackathon for the first time, and 40 percent had never coded before. Organizers hope to continue to build on the success of last year’s event by doubling attendance and building an even bigger community of young, innovative and ambitious women in technology.