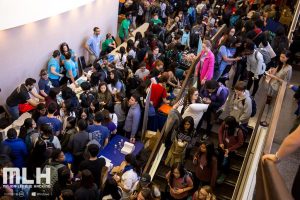 Pearl Hacks 2017 brought women from all over the country to UNC-Chapel Hill in February. The event sought to address the gender imbalance in computer science and technology by providing resources and education and by building community among women in computer science.

Pearl Hacks, an annual 24-hour coding competition for women in high school and college, was held for the fourth time at UNC-Chapel Hill. Event organizers said that the number of participants this year was between 300 and 400, and many of those attendees were coding for the first time. In addition to high school and college students from around the state, participants came from schools all over the East Coast, including Virginia Tech, Georgia Tech, Maryland, Rutgers and NYU. Founded in 2014 by computer science major Maegan Clawges as a way to support and encourage women interested in computer science, Pearl Hacks has inspired similar all-female hackathons around the country. Because the field is male-dominated, many women who enter computer science as students or professionals eventually leave for other disciplines. Women-focused events like Pearl Hacks give women the opportunity to enhance their skills and knowledge in a different environment while building lasting friendships with peers who will become their classmates and co-workers. This year’s winning project, CrossBorder, is a blockchain-secured service to register refugees when they arrive in a new country. The service allows refugees to register their information and track checkpoints they reach as they immigrate, and an integrated feature automatically sets up a credit card in the user’s name, making it easier to send aid to individual groups of refugees in specific circumstances.

Other impressive projects from the hackathon include vaLIVEtine, an app that alerts distracted mobile users of impending collisions with motor vehicles; encore, a mobile app for locating and paying street performers; ProBoKnow, a website to connect lawyers willing to work pro bono or at discounted rates with clients who need them and NiceType, a tool that detects negative comments on YouTube. The event began with an opening ceremony at 10 a.m. on Saturday, February 11, and participants started hacking at 11 a.m. The weekend was full of non-hacking options, including icebreakers, a sponsor fair, tech talks and workshops. In addition to technical topics like programming languages, project management and wearable electronics, tech talks and workshops also covered life after college, diversity and inclusion in technology, and even how to win a hackathon.