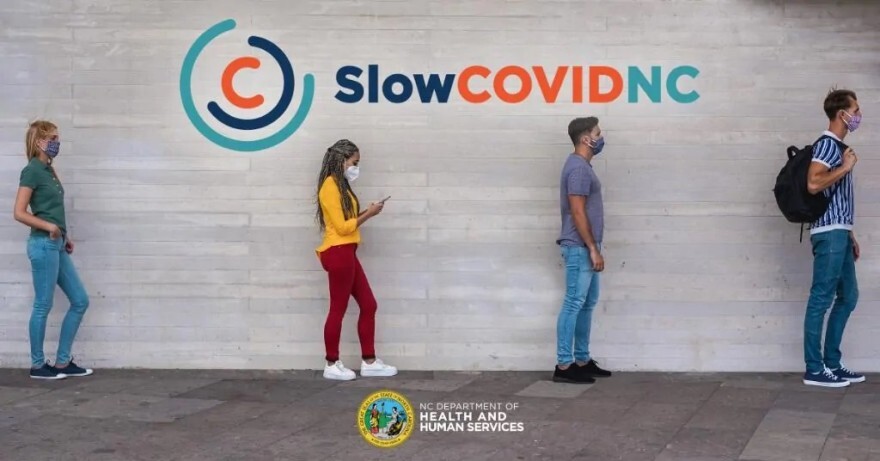 About a quarter of a million people in North Carolina have now downloaded a cell phone app that alerts them when they come into close contact with someone who has tested positive for the coronavirus.

The idea behind the app, launched by the N.C. Department of Health and Human Services on Sept. 22, is to help quickly track infections and slow the spread of COVID-19, which is increasing dramatically across the state and the country as the weather turns colder.

The app, called SlowCOVIDNC, relies on users to voluntarily and anonymously report a close contact with an infected person and to then get tested and self-quarantine if necessary. The app can be downloaded for free on iPhone or Android cell phones through the Apple App Store and the Google Play Store.

Since the app’s launch, DHHS has focused its use at the state’s colleges and universities and is now also seeking to involve more businesses, DHHS spokeswoman Kelly Haight Connor said in an email last week.

So far, Haight Connor wrote, the app has sent 346 exposure notifications, most of those beginning Oct. 3. The app has led 46 people to anonymously notify others of their positive COVID-19 test results.

It is not clear where those 346 exposure notifications came from or whether the bulk of people downloading the app are college students.

“I don’t think we have any demographic info about those who have downloaded the app since it’s completely anonymous,” Haight Connor said in another email.

Kimberly Powers, an associate professor at UNC’s Gillings School of Public Health, sees issues with the app, including whether people who use it will get tested and self-quarantine if necessary. But she says the benefits outweigh any issues.

“As with any single intervention against COVID-19, apps like these are unlikely to be, you know, a miracle or a silver bullet or a panacea, but, again, I think they offer an additional tool to help us combat the spread,” Powers said.

Bluetooth Reliability
Reliability of the app could also be an issue, said Samarjit Chakraborty, a professor in UNC’s Department of Computer Science.

“The contact tracing app should be used, and it will certainly help, so it is a good thing,” Chakraborty said. “The only pitfall is that we have to, all of us, and especially the doctors and policymakers, realize that these contact tracing apps are not 100% reliable.”

Chakraborty was among the authors of a report that studied why smartphone-based contact tracing could be unreliable, and what steps could be taken to improve their reliability.

In it, the researchers explain that contact tracing apps rely on a mechanism called Neighbor Discovery, which involves smartphones transmitting and scanning for Bluetooth signals to record their mutual presence whenever they are in close proximity.

“The hardware support and the software protocols used for ND in smartphones, however, were not designed for reliable contact tracing,” the researchers reported. “Even though their Bluetooth radios support the essential features necessary for contact tracing, tracing reliability will always be limited, potentially leading to false positives and/or missed contacts.”

Chakraborty explained that Bluetooth works by sending out beacons, searching to pair with another Bluetooth device in close proximity. It can take up to 5 minutes for two cell phones to pair, he said.

“You know, you have your phone and I have my phone and both our phones are in our pockets or in our bags, and we cross each other and the phones are supposed to register this and that registration process will not happen with 100% reliability,” he said.

Chakraborty’s paper concludes that an as-yet-developed wearable device, such as a wristband, could eliminate many of the shortcomings of a smartphone app and be much more effective at contact tracing.

Chakraborty acknowledges that such a wearable device would face logistical hurdles, including speed of development and access to the masses. But he said it could be beneficial to use in places such as schools, where children share close spaces and might not be able to use smartphones.

Scientists in the United States and around the globe are taking the issue of anonymity — and privacy — extremely seriously. In April, hundreds of scientists from 28 countries signed a memo stating their privacy concerns with apps that use GPS as a tracking device.

“Research has demonstrated that solutions based on sharing geolocation (i.e., GPS) to discover contacts lack sufficient accuracy and also carry privacy risks because the GPS data is sent to a centralized location,” the memo states. ”For this reason, Bluetooth-based solutions for automated contact tracing are strongly preferred when available.”

The researchers agreed that the apps “must only be used to support public health measures for the containment of COVID-19. The system must not be capable of collecting, processing, or transmitting any more data than what is necessary to achieve this purpose.”

Among those who signed the memo was Anupam Das, an assistant professor in N.C. State’s Department of Computer Science who specializes in privacy issues. Although Das said he has not analyzed the app that DHHS is using, he suspects it was developed by Google and Apple.

The app uses Bluetooth technology based on the Exposure Notification System developed by Google and Apple. Many other states and countries are using the same system.

Model Gives Promising Data
At the University of Oxford, researchers developed a model that found that in Washington state, coronavirus infections could be reduced by 8% and deaths by 6% if just 15% of the population used the tracing smartphone app in addition to traditional contact tracing.

“Our models show we can stop the epidemic if approximately 60% of the population use the app, and even with lower numbers of app users, we still estimate a reduction in the number of coronavirus cases and deaths,” Oxford professor Christophe Fraser said in a university new release in September.

That may sound great on paper, but getting a large percentage of people to download the app could be a major challenge.

A survey conducted by Avira, a computer security software company, found that more than 71% of Americans who responded said they don’t plan to download a contact tracing app, mostly because of concerns over digital privacy.

This article first appeared on North Carolina Health News and is republished here under a Creative Commons license.