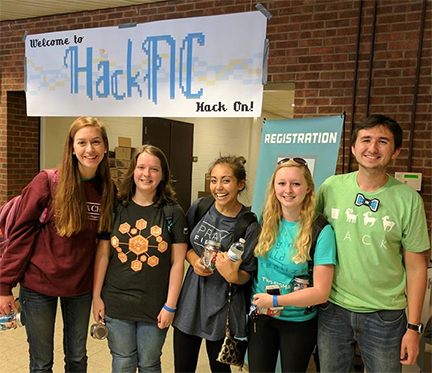 HackNC, a 24-hour hackathon held annually at UNC-Chapel Hill by the UNC Department of Computer Science, brought more than 700 computer science students from all over the east coast to Fetzer Gym in October.

A hackathon is a coding competition in which participants team up to work on software and hardware projects. At the end of the competition period, the finished projects are presented to a panel of judges, who select the winner. Projects may involve only code, but hardware is also available, including computers, sensors, smartwatches, virtual reality headsets, computer components and soldering kits.

Growing registration numbers forced the HackNC 2016 organizers to move the event from its previous home in Sitterson Hall to a larger, more flexible space in Fetzer Gym. Jacob Vosburgh, a member of the event’s student organizing committee, said that having no required minimum level of coding experience makes it a valuable event for any student interested in computer science.

“HackNC is an opportunity for people of all skill levels to learn something new and build on their experience,” Vosburgh said.

The 24-hour hacking period began at 11 a.m. on October 29, and the winners were announced during the closing ceremony the following afternoon.

The winning hack this year, Iodine Monoxide, is a game aimed at helping students learn about molecules using the Leap Motion controller. The game, which connects to a website with separate interfaces for students and teachers, lets students build molecular structures using gestures performed over a Leap Motion controller. Each time the student user completes a task, the teacher’s interface is updated with the student’s progress.

Inspired by the common chemistry classroom technique of having students build molecules using balls and sticks of uniform sizes, Iodine Monoxide enhances the process by automatically sizing and connecting atoms based on their physical properties. The ability to quickly recognize grab and drop gestures and start over without deconstructing the molecule also speed up the learning process.

Other prize winners and honorable mentions included software to sanitize the web while you browse, let gamers use a selfie stick and a smartphone as a golf club controller, and quickly secure a user’s network or device. Seventy-seven submitted hacks from HackNC 2016 can be viewed at hacknc-2016.devpost.com/submissions.

When students needed breaks from coding, the event organizers offered alternative activities, including cup stacking and capture the flag, that forced the participants from a variety of schools to be social with each other and make friends.

According to organizing committee member Luke Tannenbaum, the social aspect of the hackathon is just as important to the organizers as the products students create.

“A lot of coding takes place behind the light of a single computer screen, but it’s gatherings like HackNC that allow us to form an academic community to build relationships that will last the rest of our lives,” Tannenbaum said.

Jon Kaplan, head organizer of HackNC 2016, wanted to thank the event sponsors for their strong presence at the hackathon and their willingness to help hackers who were stuck on a problem or in need of ideas to improve their projects.

For more information about HackNC 2016 and the successful hacks, contact hack-nc-2016@cs-old.sites.unc.edu.