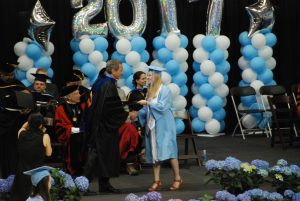 On May 14, the UNC Department of Computer Science recognized 286 graduates in its annual commencement ceremony in Carmichael Arena.

The department recognized degree candidates for May 2017 as well as those who received degrees in August 2016 or December 2016. Among the 286 degrees conferred were 20 doctorates, 32 masters of science, 134 bachelors of science, 78 bachelors of arts and 22 undergraduate minors.

Sarah Rust, a graduating master’s student, received the John M. Glotzer Teaching Assistant Award. Jeffrey Young became the second recipient of the department’s Learning Assistant Award, recognizing an outstanding undergraduate teaching assistant. Both students will have their names added to a plaque hanging in the lobby of Sitterson Hall.

Graduating computer science majors Nancy Gao and Morgan Howell delivered speeches reminding their classmates of how much technology has changed the world since they arrived in Chapel Hill and urged them not to underestimate the impact they can have even as individuals.

Earlier in the morning, the department held a doctoral hooding ceremony in Brooks Building. Doctoral graduates were recognized individually and hooded by their advisors and the director of graduate studies.

Prior to the department-wide commencement in Carmichael Arena, all graduating students were invited to a reception in Sitterson Hall and Brooks Building, where they were served cake and ice cream by computer science faculty and alumni.

Photos of each graduating student were taken at Carmichael Arena by Photo Specialties. If you would like to purchase photos from the event, please email info@photospecialties.com or call 919-967-9576. You can also view a collection of department photos from the day on our SmugMug page.