Home / About / Why UNC CS? / About the University

The University of North Carolina at Chapel Hill is the flagship school for the UNC-system. It is an original “Public Ivy” school, with an academic reputation similar to that of an Ivy League school at the price of a public university. It was ranked by U.S. News & World Report as the #5 public university in the United States for 2017 (for more rankings, visit our Department and University Rankings page). UNC has more than 300,000 living alumni. Some of its most notable former students include author Thomas Wolfe, Pulitzer Prize Winner Lenoir Chambers, and two Nobel laureates – Aziz Sancar in chemistry and Olivier Smithies in physiology/medicine.

UNC also has a strong sense of school pride. It is very common to see the lower quad filled with students in Carolina blue clothing during a class day. This is especially true on the day of an important sporting event. UNC has recently or traditionally had successful teams in men’s and women’s basketball, men’s and women’s soccer, football (also known as gridiron or American football), baseball, field hockey, men’s and women’s lacrosse, and more. 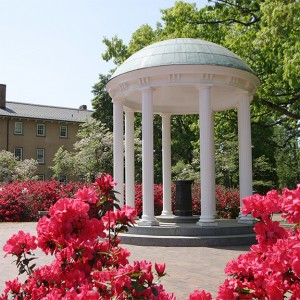 The Department of Computer Science frequently collaborates and shares resources with other research units in the university.

The nearby UNC School of Medicine, ranked #22 nationally in research and #2 in primary care by U.S. News and World Report, provides our faculty members with opportunities to undertake collaborative research projects in robotics, medical image display and analysis, bioinformatics, augmented reality, and more. The School of Medicine is comprised of more than 25 departments and nearly 50 research centers, with a number of medical faculty holding adjunct or dual appointments with the Department of Computer Science.

The Kenan-Flagler Business School, ranked the #16 graduate business school in the country by U.S. News and World Report, is located southeast of Sitterson Hall, near UNC Hospitals.

RENCI (Renaissance Computing Institute) is a UNC institute located near campus that collaborates with our department as well as with Duke University and N.C. State University. Multiple RENCI researchers hold appointments with the Department of Computer Science, and the department regularly shares human resources, infrastructure, and technology with RENCI (and vice versa).

The University is in the early stages of implementing a Data Science curriculum, and the Department of Computer Science is one of the major proponents and contributors to course offerings. The School of Information and Library Science at UNC has a strong graduate program, and there are collaborations and networking opportunities between researchers in SILS and CS.